A year ago, I visited the abandoned remains of an old logging and railroad town in the White Mountains of New Hampshire. During the later half of the 19th century lumber barons, many of whom were from out of state, invaded the virgin forests of New Hampshire and Maine. They staked claims, set up camps, and employed large numbers of men to clear the forests. Makeshift camps and a few actual towns sprang up so the men could be closer to the work. Trails then rails cut through the forests to expedite the removal thousands of acres of trees.

The earliest of the lumber barons made their money with no thought of sustainability. When the wood was cut it was gone. They moved on. Two brothers from Massachusetts, Daniel and Charles Saunders purchased an 80,000-acre parcel known as Elkins Grant. They set up a mill, a town, and then a railroad. The town incorporated as Livermore, NH. At its height, it had approximately 200 people and all the elements of a thriving small town. Children were born, a school was built, a post office and general store. The Saunders lived in a mansion on edge of the town.

The significant contribution that they made to the logging industry of New Hampshire was their practice of selective cutting. They were one of the first operations to move away from clear-cutting. Their motivation was not the sustainability of the environment by any means. They learned that by selectively cutting the mature trees, replanting and leaving younger trees to continue growing would ensure that they would have a product to harvest well into in the future.

Things happen, times change, partners die. The little town of Livermore fell away a little bit at a time. Fires destroyed the mill and school buildings on more than one occasion. A devastating flood caused a lot of damage to road and rail. Numerous land disputes by abutters all chipped away at life in Livermore. The 1930 census records only 23 people as living in Livermore. In 1951 Livermore was unincorporated as a town. The land that was once a thriving town was deeded tract by tract over time to the National Forest. Approximately 12 acres of Livermore remains in private hands. That land is where the original Saunders mansion once stood. Today the Shackford family own a small camp with a cabin built from wood salvaged from the mansion house before it was burned down. It must be pretty cool to own your own town.

I am fascinated by the stories of abandoned places. When I visited last year, I had an adventure before I made it to the town and was not able to spend much time exploring. This year I brought a friend. We spent the night and explored everything we could. You can reach Livermore by taking Sawyer River Road off Route 302 in Bartlett. Last year the road was closed because a flood a couple of years ago completely washed out a section of the road close to the town.

I hiked the 1.2 miles in. The road follows closely along the Sawyer River. Sometimes very close and sometimes the road climbs uphill from the river. While stopping for a water break on the shady side of the road I had taken my day pack off to cool off for a minute (Remember I’m old and out of shape. I stop several times during a 1.2-mile hike). I didn’t realize how close to the edge it was and it tipped over, rolling down a very steep drop to the river. My phone, my car keys, my id! Everything was in that pack. Not retrieving it was not an option. It was easy getting down to the pack. Getting back up to the road? Not so much. It took me over 45 minutes to haul myself up. Trying to grasp roots and trees that had not much more than compost holding them I kept getting up and then slipping down even further. In the slipping down leaves and dirt and twigs plowed their way up in my pants and shirt. With all the sweating I was doing I was covered in mud. I can remember the moment I reached up and felt the road. I had to get my leg up so I could roll myself over onto the road. I just laid there in the middle of that road, spread eagle, a dirty sweaty mess breathing heavy. When everything calmed down, I picked myself up, used my water bottle to clean my face and hands and continue on my way. It was hard. My legs were rubbery, but I didn’t give up. I didn’t quit. I was too exhausted to stay long. I still had to get back to my car and get my big pack and backpack to a campsite. I promised myself I would return. I did that this summer, almost a year to the day.

Happily, this year the road was open, and I could literally drive up to the town! It was a beautiful Saturday so there were a lot of people out exploring. No one was exploring Livermore. The Sawyer River Road is used more by hikers on their way to the Mt. Carrigan fire tower, and other trails in the Pemigewasset Wilderness and Crawford Notch. My friend Greg and I ate MRE meals for lunch at the edge of a meadow near the river. Then we left our packs to go exploring. The boulder-strewn river was clear and cold and provided a great soundtrack for our visit.

We walked up to where the Shackford camp is and located ourselves on the old town map. We found the safe left in the cellar of the general store/post office building. It’s rusted but you can still see the ornate trim around the door. 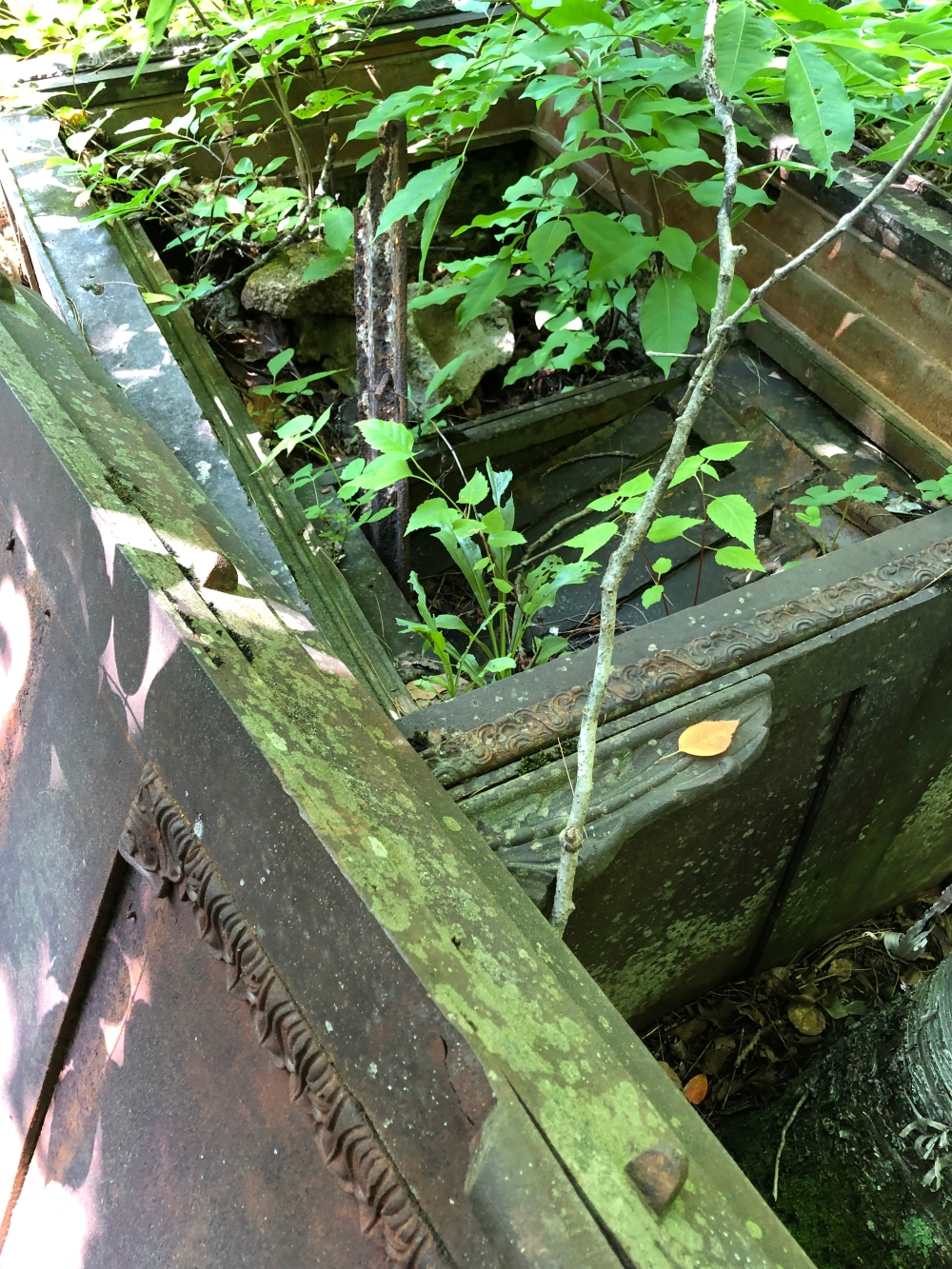 Next, we explored around the powerhouse and sawmill. These were the most intact building remains. They are visible from the road. I don’t understand why more hikers don’t stop to check it out. 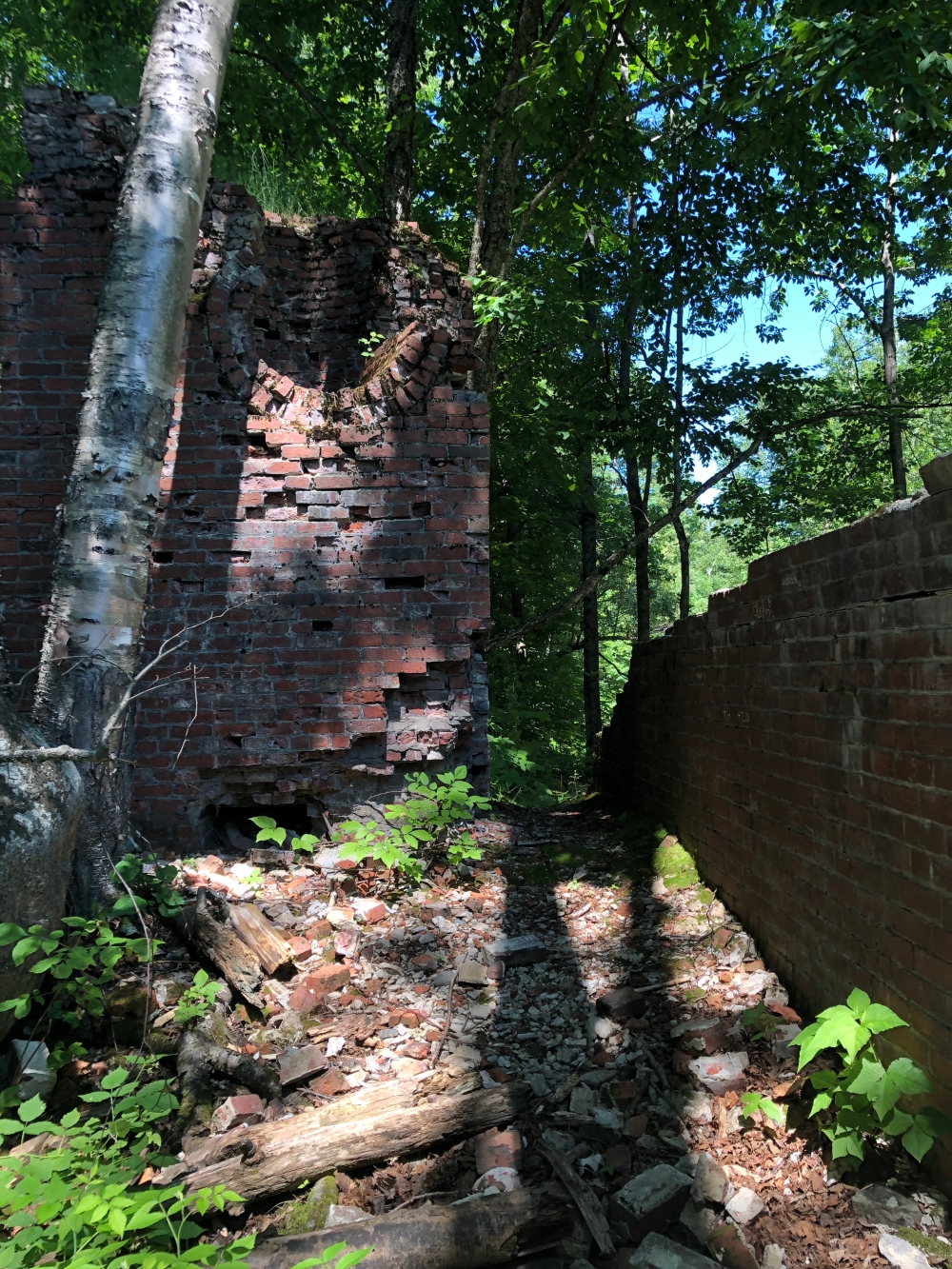 Walking a little further down the road, on the other side of the street we saw the foundation of the schoolhouse and in the schoolyard the base of the flagpole. From there we tracked back trying to identify the Donahue and Goulding houses as indicated on the map. Nothing of them remains but we did see what should have been St. George’s Hall.

Making our way back down to the river we saw all kinds of artifacts in and around the sawmill. A bed frame, some 55-gal drums, iron pieces, spikes, cans, pails, chains, and such. We only took photos. We didn’t move anything. 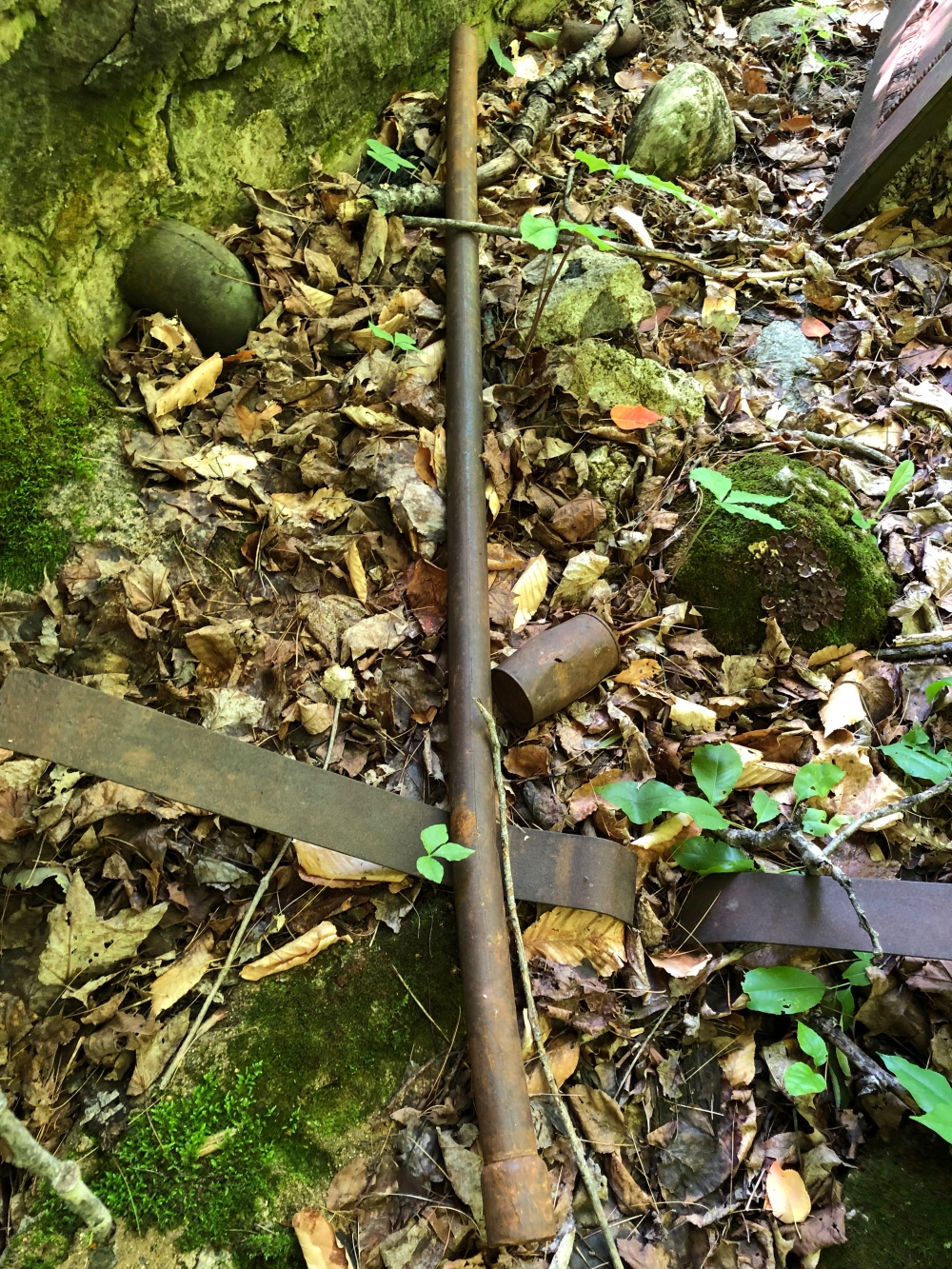 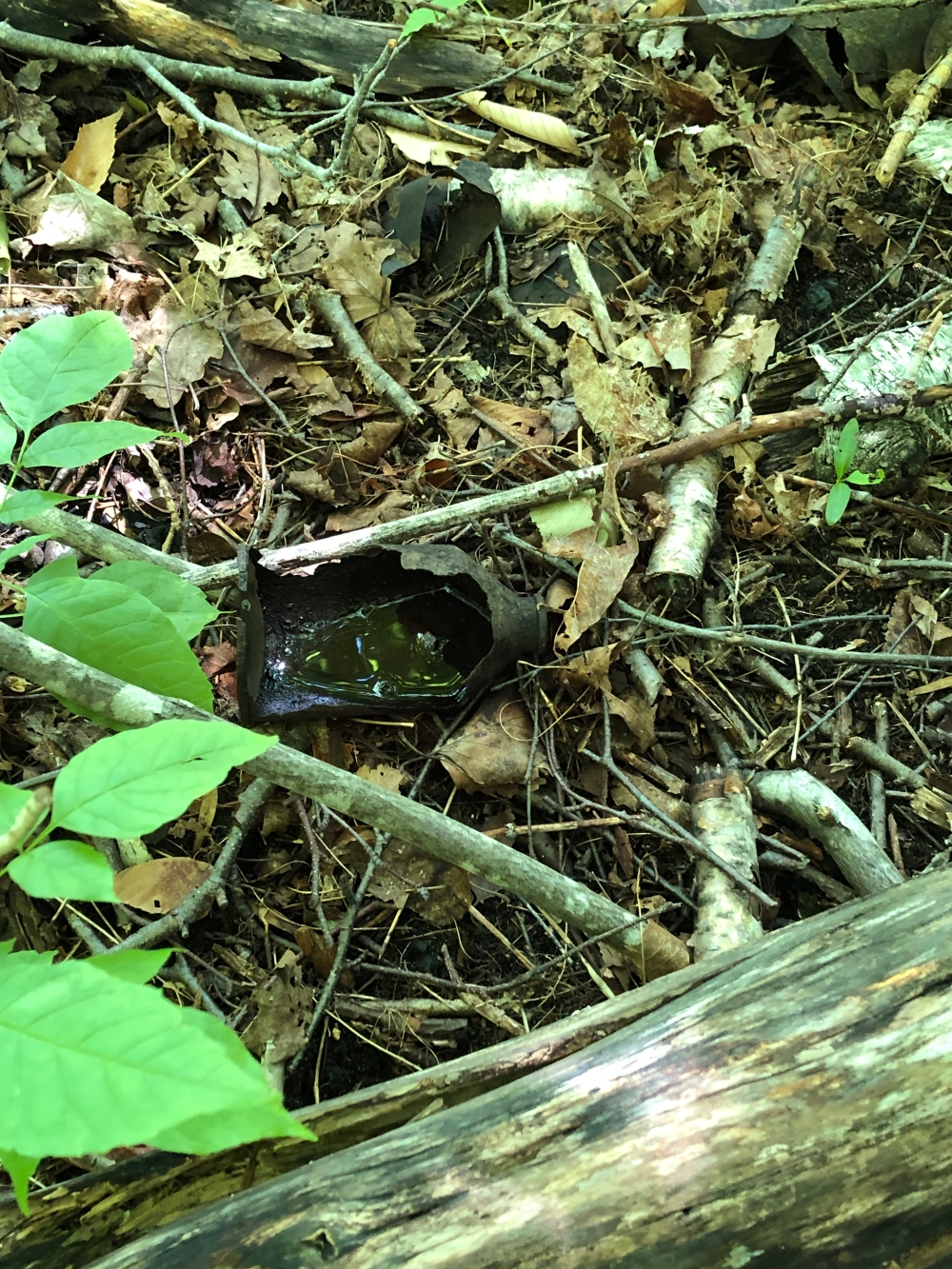 The payoff of this hot hot summer day was the cool and swiftly moving river. Just pick a pool or boulder and let the water refresh you. It was lovely and I definitely needed to hang my hammock over that river for a spell. We camped nearby. It was a warm night, so we had no fire. We used our stick stoves to cook Mountain House meals and make tea. The only sound all night was that river rushing by. 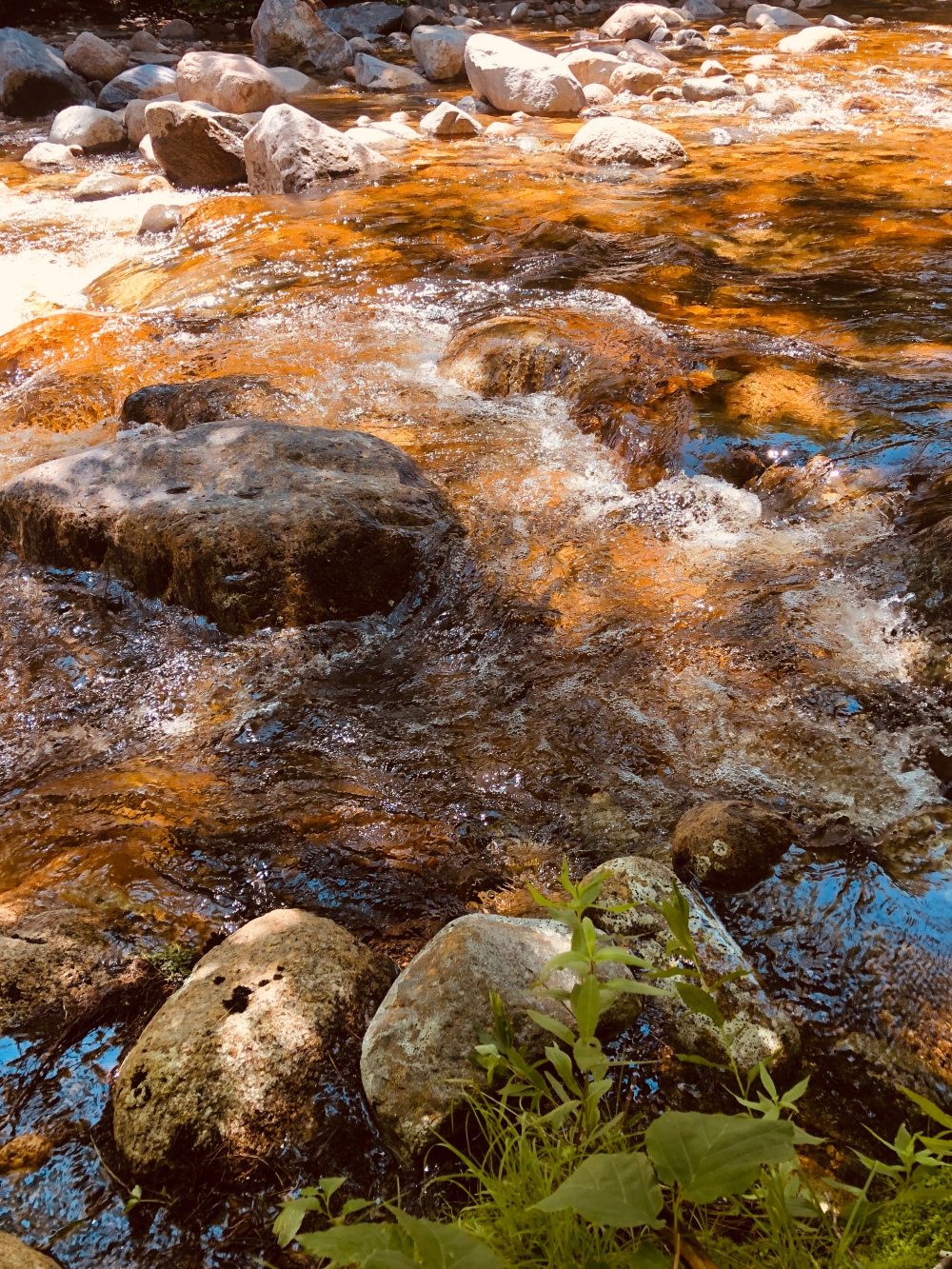 In the early morning, I took my stick stove down by the river, made awesome coffee and sat on a boulder in the river feeling utter joy.

The air was already warm but the rock I was on was cool. My feet were in the water. I was all alone. There were no distractions. This was my morning meditation. It set up the rest of the day for me to appreciate everything. That concludes my adventour of Livermore.